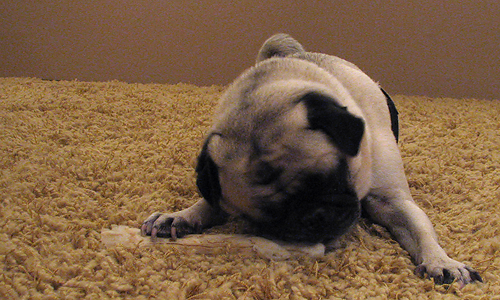 Last week Darci & Abbey the pug wrote in wondering about chewing.  Abbey loves to chew and Darci was wondering if all pugs are avid chewers.  Three out of the four of my gang love to chew.  How about your pugs?  Do they like to chew and if so what is their favorite type of bone.

Martha wrote in yesterday with a great idea for a blog post - words and phrases inspired by our pugs.  Some great pug vocabulary like stinkles for our pug’s smelly little wrinkles and furbleweeds for the massive amounts of pug hair that we have floating around our house have come up in some of the most recent blog posts.  So, Martha had the great idea to start a post where we can share all of our pug inspired vocabulary.

What are some of your pug inspired words or phrases?

Do you brush your pug’s teeth?

February is National Pet Dental Month and I was wondering about your pug’s dental routine.

We brush Benjamin, Henry & Luna’s teeth pretty regularly, but I’m afraid not as often as the recommended daily brushing.  My gang loves their peanut butter flavored tooth paste but they are not too keen on me moving the brush around in their mouth.  Henry is the best at sitting still and letting me brush and it is pretty much a toss up between Benjamin & Luna for the honor of worst tooth brusher.  Luna might barely edge Benny out to take the prize because her mouth is so tiny and she just refuses to sit still.  I can usually guilt Benny into sitting still for a second or two by using a disappointing tone while saying his name.  This always makes him want to try to be a good boy.  Luna, on the other hand, sticks to her guns and fights me all the way.  If I am lucky, I can work in a tooth brushing about once a week, but I am trying to do better and work my way up to daily brushings.

How about you?  Do you brush your pug’s teeth? (I also look forward to your thoughts in the comments.) 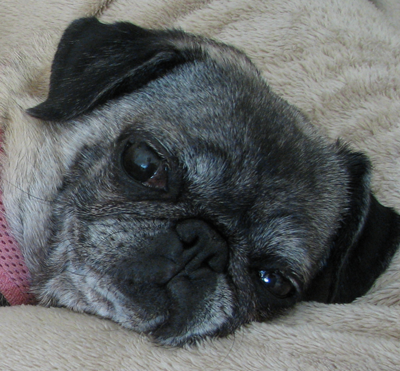 I have a question for all you pug lovers out there.  When did your pugs start to go gray?  Little Luna is about 4 years old, but as you can see her face is already very gray.  The boys, on the other hand, are 5 years old and have a lot less gray.  However, I did notice little bits of gray creeping in on their chins when they were about 2 years old.  Right now, the are primarily gray on their chins with a little bit of gray on their face. 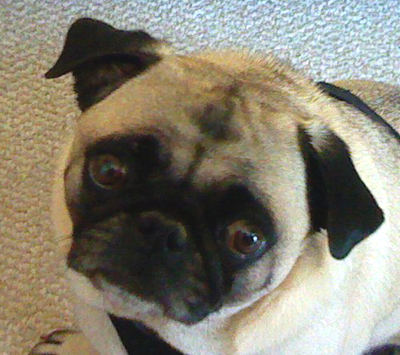 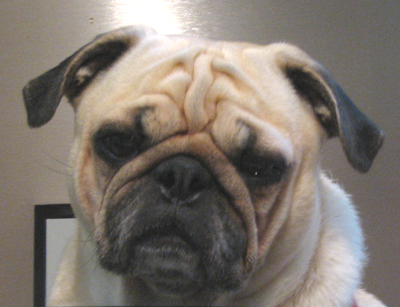 Is your pug a picky eater?

Darci and Abbey the pug wrote in wondering about the eating habits of other pugs.  It seems Abbey will eat just about anything and Darci was wondering if all pugs were that way.

Well, I can certainly say that Henry will eat ABSOLUTELY ANYTHING!  I have yet to come across anything that he will turn down.

Benjamin, has turned down a few things, but for the most part he eats everything as well.  He won’t eat lettuce or cucumbers and he isn’t real fond of spinach.  However, if it is high in carbs he will devour it (pumpkin bread!).

Luna, on the other hand, has quite a discerning palette.  Just the other day she turned down a graham cracker and I must add this tickled the boys pink.  She doesn’t particularly care for Cheez-Its either and she never eats her broccoli.

What about you?  Does your pug eat everything?  Or does he turn some food items down?  Tell us about in the comments and vote in the poll.

What would you do?

The Mega Millions lottery draw is up to a whopping $355 million.  Needless to say, people are lining up to purchase what they hope is the winning ticket.  The Mercury News, polled a few individuals on what they would do if they won and I just love Dan Orloff’s response:

“I’d retire and run a pug ranch,’’ he said.  “Hundreds of little pugs running around can put a smile on just about anyone.”

Barking at the TV

Yesterday, we watched the Puppy Bowl III before the Super Bowl.  Benjamin got really into the game and spent most of the time running up to the TV and barking at all the adorable puppies.