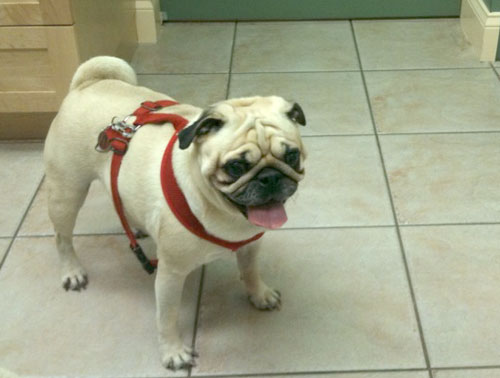 At his checkup last Friday, we found out that Benny has an ear infection in his left ear. Since Benny just started shaking his head a few days before, I was expecting the diagnosis. The infection isn't too serious, so we have to flush and add some drops to his ears for the next 10 days. He is handling his new morning ear routine better than I expected so that is making things a lot easier.

Our other chief concern was his hiatal hernia which makes him have a little coughing episode anywhere from 3 to 6 times a day. We were prescribed a new medicine that works great in some dogs and not at all in others. We are trying it out for the next month to see what kind of effect it has on Benny. The first two days he was on it, he had no coughing episodes, which had me on cloud 9. However, since then he has had at least one coughing episode per day. So, they are less, but not completely gone. But, I'm not sure if we will keep him on the medicine because the main side effect is jitteriness. Benjamin is naturally hyper enough, so once the medicine got into his system he was bouncing off the walls. Although, he seems to have calmed down a bit the last few days.

With the two big items out of the way, Benny got his shots and the rest of his exam. The scar on his chest from his mast cell removal has healed wonderfully. Other than his teeth, he got a good report. His teeth don't need a cleaning now, but probably will in about 6 months. As much as we try to brush his teeth, he still needs to get cleanings. The vet attributes this to the arrangement of his teeth in his mouth. His teeth are packed in there which makes it very hard to get them cleaned. Henry is on the same tooth brushing routine as Benny and he got a stellar report on his teeth.

What a beautiful picture of Baby Benny!

Good to hear Benny is doing better. Do they operate on hernia’s for dogs? I had no idea they could get them. Stay well sweet boy! Pug-hugs from the Colorado 5

I didn’t know Benny had a hiatal hernia and neither did I know that dogs got them.  Baby, I know you are beating that ear infection, and hope that soon the right med can be found for that hernia.  You don’t need the jitters…they are not pleasant at all.

I love the photo of you.

Benjamin Baby, you are a handsome, healthy love muffin!  Good boy for tolerating your ear meds…I do believe that is cause for some extra goodies!!!

Love you gang…Look forward to hearing about your good report Hank!  Give Looney kisses too!!

Glad you found out what was up with Benny’s ear…They usually give some sign that it’s bothering them.  I can always tell when C.J.‘s ears bother him and I know it’s time to start flushing them out!  And he HATES that so he grrrrrrs at me in his toughest voice which just makes me laugh.  When he hears “Let’s do ears” he heads in the other direction!

sounds like Benny did pretty good at his check up I never heard of that kind of hernia either where is it located do they do surgery for it? hope Bennys ear infection is gone real soon

Hope Benny’s ear clears up fast!  And the coughing, too!  It seems that every medicine that does something good also comes with a side effect.

And I love the picture of Baby Benny so much!

I get a very funny picture of Benny bouncing off the walls.  It’s such a relief to know that Benny is AOK.
Everyone is letting out a large sigh.

Karen - do you run all over the house with ear drops in hand?

Do you give him a reward after it?  That might help.  Abby gets two eye drops at night but I put a slice of cheese (on my shoulder - yes), so now when she sees the cheese she has learned when she sees me with the cheese, she gets on my bed (it’s a high bed which helps put her at the level that is easy to do the eye drops. She scrunches down but doesn’t give a thought to getting off the bed. When I’m through she gets the cheese.  She thinks she won and I think I won.
But you may do the same already.

I absolutely love that picture of Benny although the under strap looks like he may have been a size 52 at some point.

Yes, Huck, I have had to chase C.J. down first!  What we usually do is have my husband hold him and feed him a treat of some sort, and while he is distracted, I slide in with the ear drops, all stealth-like, and get him!
When I have to wash out Toeby’s ears at bath time, he cracks me up cuz he can actually “clench” his ears and its hard to get the tip of the bottle into his ears!  These pugs are too funny!
The cheese on the shoulder is a GREAT idea!  I may try that next time!

Benny, you always have great pictures!  I’m glad you got a good bill of health

Piper is a scruncher too for his ear cleaninngs.  I don’t know how he can shut his ears so good??  Marley runs and hides.  When he thinks the coast is clear I’ll snatch him up, then lock us both in the bathroom for his ear cleaning.  After that he runs all around the house rubbing his head on anything he can find…he’s just a nut!  My girls don’t give me any trouble all at!

We got some good news for our foster Miss Peanut yesterday!  The last test for her female trouble showed no abnormal cells, but it did show 2 different types of bacteria.  She will be on a strong antibiotic for a month!  And she will be adopted this Saturday!!!!!  Good news for her, another family wants to love and spoil her.  But bittersweet for me.

Andi, I am glad to hear that Miss Peanut will be ok.  I am also very happy she has found her forever home; however, it has to be an emotional tug of the heartstrings for you.  You can be happy that you gave her love and attention, and prepared her for a forever home.  God bless you.

Awww Andi, GREAT news as you send Miss Peanut on her way to her forever home…You, and all that foster, are amazing people…thank you for loving her and getting her in tip top shape for her forever home!  Give her a good luck kiss from us!

Good check up news for the boys.  Funny how these smart puggers figure things out quick!!  A soft cloth means it’s time to clean “stinkles”, a little ear rub means mom is going to look in there.. maybe put some drops in there…lol and yes sometimes it send him running in the other direction!!
I like the cheese routine!  too cute.

thinking about you Andi… pug hugs all around for Miss Peanut and your family for lovingly helping her get on her feet and to a new forever home God Bless!

Other than coughing, how do hiatal hernias present themselves in dogs?  My Grandmother had one and it was like heartburn, but she was in her 90s and not a dog.

Is this unusual for dogs?  Corrine, I think you need a vet on a retainer, it might be cheaper.  (As if we would not spare any expense for our “family”.)

You’ve got to be kidding…clenched ears?  Guess I’ll have to try some eardrops on my gang to see if they are so talented.  How hilarious.  I thought Abby’s eye drops were enough to deal with.

Andi, that is wonderful news about Miss Peanut going to her forever home.
a reminder I always need to remember…Georgie had been on antibiotics earlier this month and had to go back to the vets Monday for mucous and blood in his stool.  The outcome was that his good bacteria had been eliminated along with the bad.  I had forgotten about this fact but you might want to tell the new parents to keep an eye out as precaution.

Andi, so happy to hear about Miss Peanut!  It must be so hard to let her go!

Also, YES, Huckle!  They can clench or scrunch or whatever you call it and close their ears almost all the way.  I have to coax Toeby with promises of “cookie” so I can clean his ears!

Aw, Benny, hoping that ear feels better in no time flat!  Abby was doing the same thing this week, so when we were at the vet for her additional lab work, the vet looked in and tested her ear and sure enough, she has a yeasty beasty in her right ear, but hers is very early and mild, so 5 days of ointment, and she should be good to go.

Except, the blood draws (2 times this week) indicate elevated liver function levels, as well as a value that more than likely indicates cancer:-(

Pug mama, please keep us informed on your precious Abby.  We care.  My prayers are going up for you and Abby.  Give that baby a hug and kiss from me please.  Sue VDB

pug mama, certainly not the best news…We’ll keep you and Abby in our thoughts!  Hugs and kisses and lots of love!

Awwwwww pug mama.another bump in the road.  You are strong and we will say a prayer or positive thinking your way. Pug hug!

Corrine, how are the meds working on Benjamin’s cough?