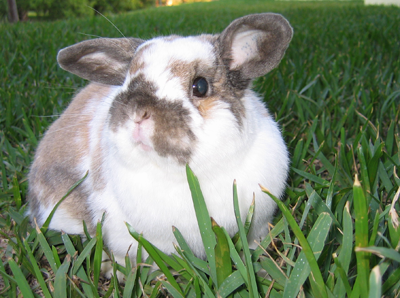 I am very sad to say that Lou C., the family rabbit, passed away this weekend.  He had just come back from a visit to the vet, where the vet said that he was in great shape for being nine years old, but that he was a few years past his prime.  We were all very distraught hearing the vet’s news and he died the very next day.  He was 9 years old.

Lou C. lived a very full and interesting life.  His life began as the classroom pet for a room full of pre-schoolers.  For the first five years of his life he was free to hop around and play with a room full of 20 4 year old children.  The children initially named him “Lucy” because everyone was under the impression that he was a girl.  However, when he went in to be fixed everyone soon discovered that “Lucy” was a boy.  So his name was changed to Lou C. - with C being the first initial of his last name.

After 4 years of teaching he finally retired and that is when he came to live with us full-time.  He quickly became good friends with Cupid, our cat, who was the only other pet we had at that time.  A few years later we got Benjamin & Henry and the boys learned to get along wonderfully with Lou as well.  Since he was litter box trained Lou enjoyed free reign of the house.  He was free to hop around anyplace he liked, although he usually never left carpeted surfaces.  He enjoyed being outside nibbling on the grass and spending some time in the sun.

Even though the vet had said that he was past his prime, his death on Saturday was unexpected.  Everyone, including Benjamin, Henry & Cupid, keep looking around expecting him to be right there under our feet.  The cat and dogs keep going into his room to look for him and even when I pass by I still can’t believe that his is not there.

Lou C. was loved by us all and he was dear part of our family.  He will forever be missed! 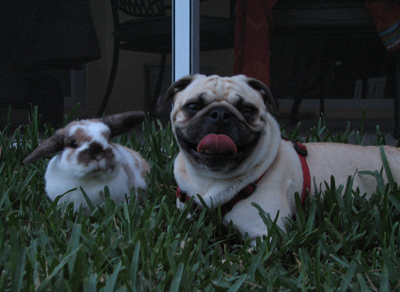 Last night we got a break from the humidity and enjoyed a rather nice Florida evening.  The boys were in the yard romping around along with Cupid, the cat, and Lou, our bunny.  At 9 years old, Lou is actually the oldest of the group and he has a very patient disposition.  He loves to play tag with the cat and he doesn’t mind hanging out with the boys either.

Benjamin absolutely adores Lou.  He really looks up to his big brother (er, well he admires him, but he has to look down to see him).  So after wrestling with Henry, Benjamin went to hang out with his brother Lou.

Here is a shot of the whole gang hanging out in the yard. 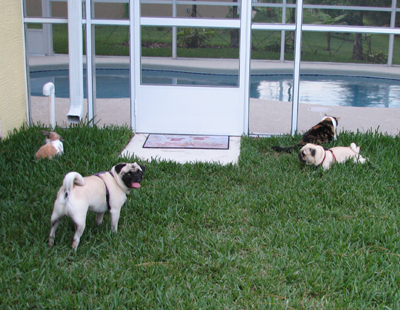