You are viewing entries tagged with the keyword Cupid

Another reason I think Benjamin loves to sit on his pile of pillows is to be closer to the cat's food. The smell of yummy cat food wafting from the cat's spot on the counter always torments Benny. The pillows bring him closer to the yumminess, but yet he is still so far, far away. Poor Benny!

Have a great weekend everyone! Don't forget to get your photos submitted to the 2012 Calendar Contest by Saturday.

Good news for the pugs - Pumpkin bread is back at Bob Evans! We brought home a special loaf to share with the pugs and they were so excited I couldn't torment them by making them pose for pictures. Let's just say it went a little like this.

But, I think the surprise of the day was when Cupid showed interest in the pumpkin bread. She didn't actually eat any, but she did spend a good 5 minutes licking the crust. It's official. She has been hanging around the pugs way too much!

The box of goodies sent by Huckle, Abby & Gracie had so much good stuff that I don't event know what to show you first. But, this shirt really did make me LOL.

I'm not sure if there could be a more appropriate shirt for us considering that Cupid, our cat, really does think that she owns the pugs. Silly cat!

Remember Simba? Well, not only does Simba visit us on walks he also makes house calls. Every so often when we are hanging out outside, Simba comes strutting over.

Benjamin is fascinated by Simba. He is still shocked that there is a cat in this world that likes him. Henry and Luna have gotten used to Simba and pretty much ignore him when he comes to visit.

And Cupid? Cupid is definitely not happy when Simba comes calling. She stares him down and gives him her best Calico attitude. Although, even though she would never admit it, she doesn't get nearly as worked up as she used to. I think even she is getting used to having Simba around. 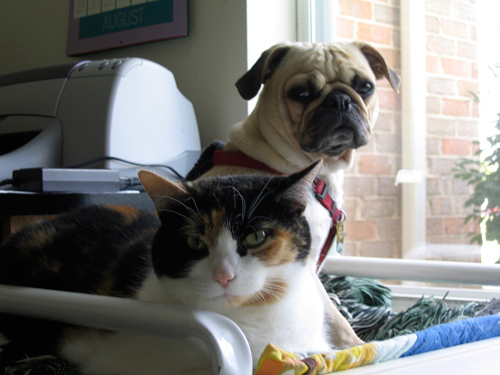 Another shot from the archives. Looking forward to your captions in the comments.

Filed Under:  cupid, caption this, benjamin 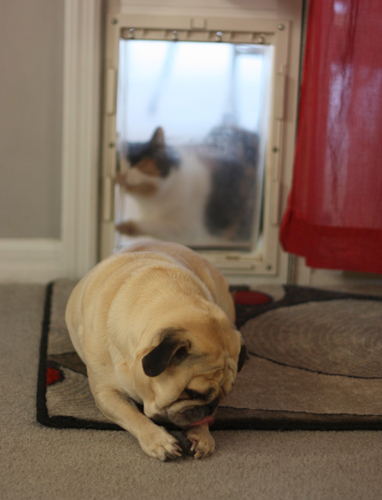 We have a doggie door that lets the pugs go out to the screened in pool area. The pugs use it, but Cupid, the cat, uses it the most. She loves to go out and roam around the screened in enclosure and when the weather is nice you can always find her napping on one of the chairs outside.

Cupid's only problem is that the pugs like to hang out in front of the doggie door and are frequently in her way when she is coming or going. The pugs are pretty much oblivious to Cupid trying to get by. So Cupid gingerly makes her way around, all the while being utterly annoyed. 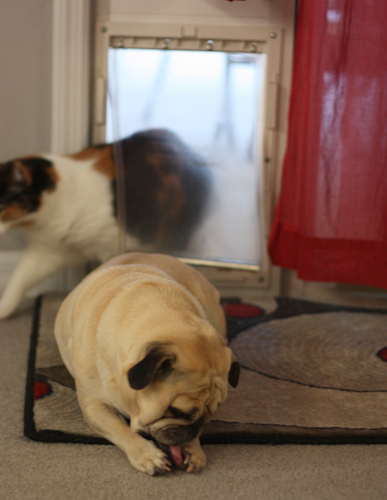 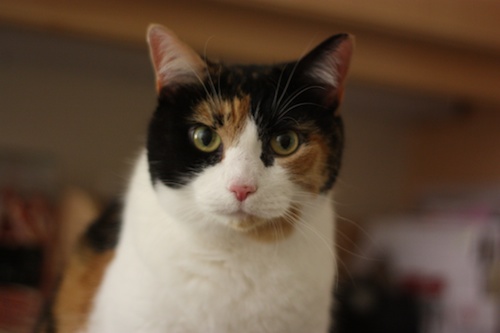 Eleven years ago today, we adopted Cupid from a local shelter. But, Cupid wasn't the cat we were supposed to adopt.

We had put in an adoption application for a different cat, but for reason's I can't remember that cat had a 3 day hold on it. So, we made sure we went to visit our soon to be cat everyday until we could bring her home. The first day we visited our potential kitty, the cat did nothing but hiss at us. This was odd because the day before the cat was perfectly nice to us. We chalked it up as a fluke and told her we would come back to visit the next day, which just happened to be Valentine's Day.

We returned the next day as promised and again the "almost ours" kitty had no love for us. She hissed and wanted nothing to do with us. We were starting to take it personally now and having doubts about adopting a kitty that clearly did not like us.

Dejected, we took a quick trip around the cat room and that is when we saw a cat rubbing up against the door of her crate. We stopped to say hello and a shelter volunteer quickly came over and asked if we wanted to hold the cat. We said yes, and Vanilla, which was the cat's pound given name, was quickly in our arms. She wasted no time flipping herself on her back and showing us her white belly.

For about 20 minutes the cat laid flat on her back, purring and kneading and drooling. Yes, drooling. Needless to say we were smitten.

The volunteer explained to us that Vanilla came to the shelter earlier that morning. A young couple brought her and her much older sister to the shelter because they just had a baby and Vanilla would not stay out of the baby's crib. The older cat that Vanilla came in with was not doing so well adjusting to her new surroundings, so the shelter staff called the young family and they returned to pick her up and bring her back home. After all, the older cat was not causing trouble with their baby. They wanted to be able to bring Vanilla back home, but they had to put their baby first.

We looked at each other, and within minutes we were filling out an adoption application for Vanilla.

As lovable as she is and given the fact that we adopted her on Valentine's Day we thought it was only proper to rename Vanilla to Cupid. After all, she used her charms to get herself sprung from the pound in less than 10 hours. 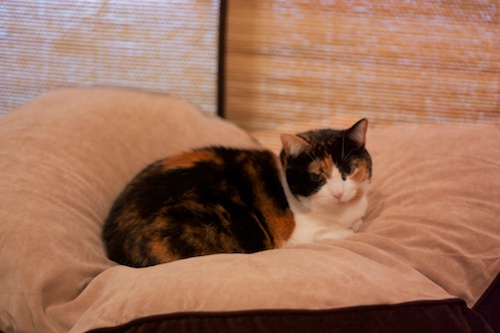 Remember when Cupid claimed the new dog as her own? She really seemed to like the bed, but I thought to myself, this will never last. She has never really been a dog bed sleeper. Instead she prefers to cuddle up in baskets or pretty much anything with sides.

Well, I couldn't have been more wrong. It has been a few months since we bought the dog bed and Cupid sleeps in it every day. In fact, if she is sleeping you can pretty much bet that she is in the dog bed.

The pugs have used the bed a few times, but for the most part they stay out of it. 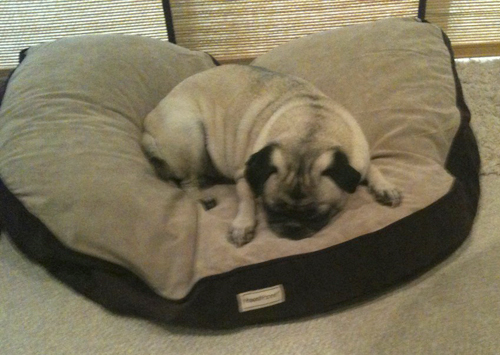 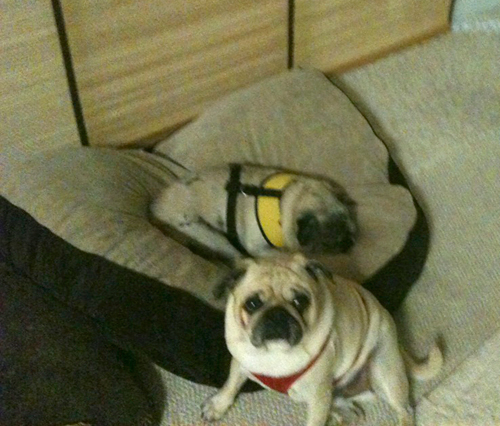 The poor pugs! Since we don't have very many dog beds around here, they don't have any place to sleep! 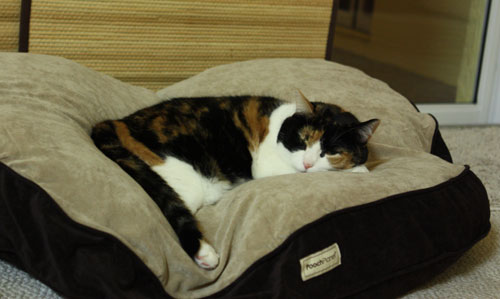 We bought a new dog bed over the weekend (as a replacement, I promise) and shortly after bringing it home, Cupid claimed it. Each evening she has been snuggled in and sleeping soundly in the new bed. 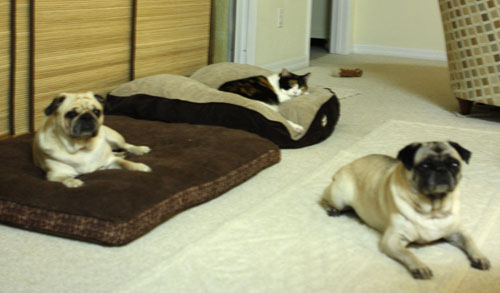 So far, the pugs seem to have accepted Cupid's decision to claim the bed as her own.