You are viewing entries tagged with the keyword Silly

Luna was quite fascinated by this little tree that she stumbled upon while we were on one of our morning walks.

She walked right up the rock, turned around and peed right on top of the little tree. Then she ran off to her brothers to tell them that she just peed on top of a tree. Top that boys!

Sometimes I think Benjamin is more of a lady than Luna. I mean he even crosses his front paws. Luna, on the other hand really likes to let it all hang out.

We held a mini swim camp over the weekend and as I was setting things up I started to feel like the pugs were small children.

First we have to dig out their life vests so they will be safe.

Then we have to get out all their pool toys so they have something to play with. And once all the pool toys are out, we have to watch them all fight for the same toy. I wouldn't know from first hand experience, but sounds like kids to me

Swim camp pics to hopefully follow later in the week! 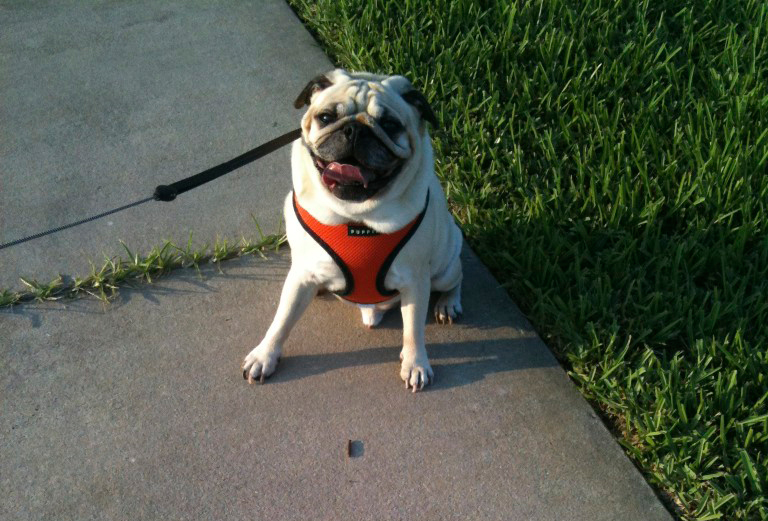 See that dark line on the sidewalk? That is a caterpillar that Benny rudely stepped on while we were on a walk. I saw the caterpillar as we approached it and I tried to warn Benny, but it was too late and he trounced right on it.

At first the caterpillar curled up in a little ball and I thought it was over for the little guy, but while waiting for one of the pugs to go potty, the little caterpillar uncurled and went on his way. Whoosh!

So, I thought the most appropriate thing to do was have Benny pose for a picture with the caterpillar that he nearly killed. 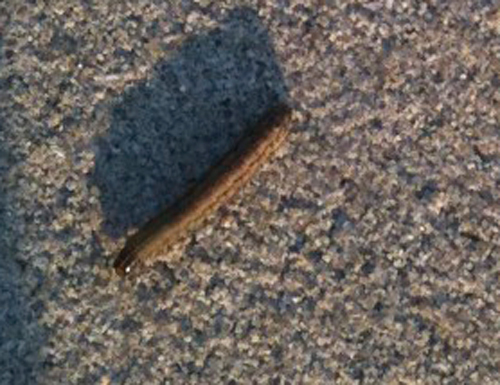 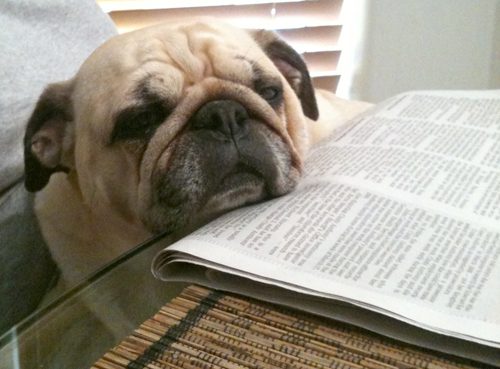 Once again, Benjamin is showing the dedication the pugs have to keeping up with current events.

Between the pugs and Cupid, it is nearly impossible to read a newspaper around here. The cat is far worse than the pugs at stealing the newspaper. We have to trick her into laying on the sections that we have already read. But even that doesn't work most of the time. 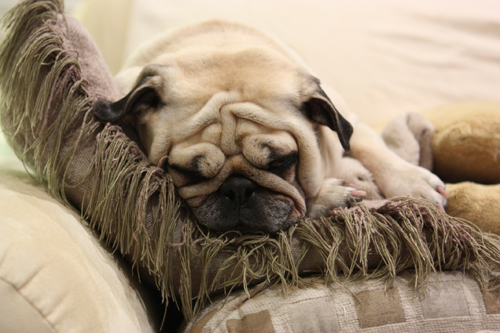 Just like the defense in the Casey Anthony Trial, the pugs rest.

Have a great weekend everyone! And for those in the US, I hope you have a restful holiday weekend! 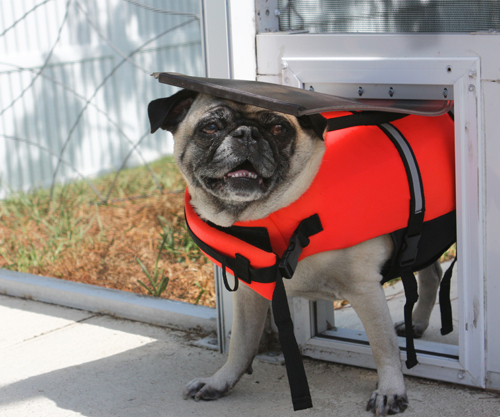 We usually put their vests on poolside, but we were out in the yard, so we just suited them up out there. Henry was dilly dallying around in the yard and did not come in with us using the regular, human, door so he had to use the doggie door. Well, with his vest on he no longer fit through the doggie door. That will teach him not to be last. 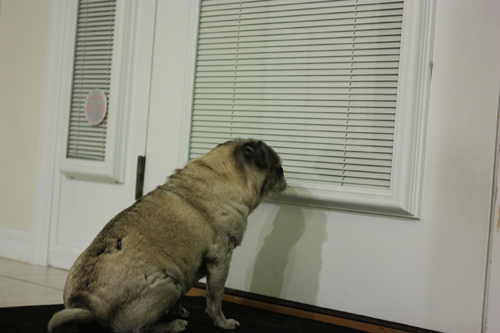 I think this is her way of asking us to open the blinds. You got to love the little girl!

Enjoy the weekend everyone!

Not Luna This Time 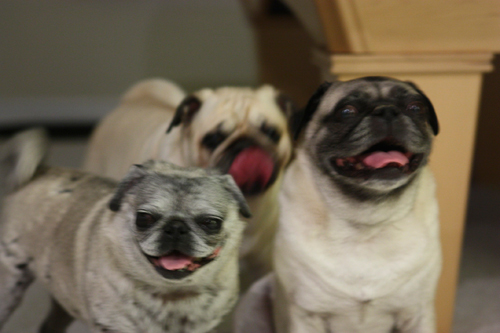 The boys have much practice posing for photos and are quite used to the sitting still and knowing the level of expectation when it comes to photo opportunities. Luna, on the other hand is a wiggle worm and tends to ruin many a photogenic moment. In this rare case seen here, Benjamin is the one that makes the picture a mess. I guess he was too bored waiting for everyone else to settle and couldn't contain his yawn. Oh my! Handsome Benjamin ruined the shot! For a change, this time it wasn't Luna who created the blur. 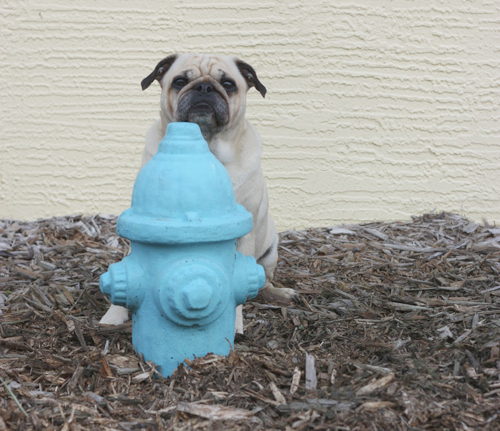 People in the neighborhood always laugh at the little fire hydrant statue we have in the yard. We found it at a concrete art type place and when we bought it it was a plain cement color. Having three dogs, we thought it would be cool, to paint it a fun color and use it as a yard decoration. It would be even neater if the pugs actually started using it like they do all the other fire hydrants in the neighborhood. But, wouldn't you know they never use it! They pee on pretty much everything else in the yard, but their own personal, pug sized fire hydrant? Nope, never once have they peed on that.