In reading some of the comments to the recent Beach Friends post, I noticed that there was a comment about how the term wiener was not a preferred term for Dachshund. Trust me, I am cool with that. With that said, I must share some history of the pugs with the Dachshunds.

Our latest trip was to Ponce Inlet dog beach where the pugs met not one but two Dachshunds. They were shown in photos in previous posts. The female Dachshund was named Sweetie. The other dog's name was Oscar. A la "Oscar Meyer Wiener".

Both of these Dachshunds were very pleasant dogs. But, rewind to almost a decade ago (how scary is that to say?!). When the boys were young, we would occasionally take them to doggy day care to get their energy expelled since at this rare moment in history, neither of us worked from home. I began working from home when they were still puppies but not yet at this point.

Anyway, we took them to a place called Ana's Ark Doggy Daycare (I believe they are still in business under a different name). This was while we still lived in Maryland. The doggy daycare had web cams so you could see what was going on in the life of your beloved fur ball. Well, mostly when we spied we would see Benjamin peeing on all the toys. However, there were only one or two beds in the corral and these would be coveted by all the other small dogs that were not the owners own 2 small Dachshunds as her two dogs pretty much never left these precious soft thrones. One of the dogs was named Gus.

Gus was a territorial bully. Gus would regularly ensure that no dog (especially no flat faced pug) was going to sleep on his pillow (or play with his toys, or stand in his space or drink from his water bowl, etc, etc, etc). So, whenever the boys would try to do any of those things, Gus would stand in front of the toys or water bowls or pillow or whatever and growl, bark or nudge the boys out of the way. Benny would back down and sulk away disappointed, but not Henry. Henry, of course knowing this was not ok, would nudge back or sneak around to try to get his way. This would make Gus a bit fiercer and often Ana, the owner, would eventually have to step in and remind the long dog to do the right thing. She did so with a stern toned, "Gus! Be Good!!"

This upset Henry probably more than it did Gus. I think Henry thought that he was the one getting hollered at. (Yikes) This went on for a few weeks. It really shook Henry up. But our guilty pleasure at home would be to randomly yell "Gus! Be Good!" and watch Henry stand at attention. He shuttered at the name Gus for years to follow.

Even now we can still catch him on it on a "good" day. The rest of the time, he no longer flinches. 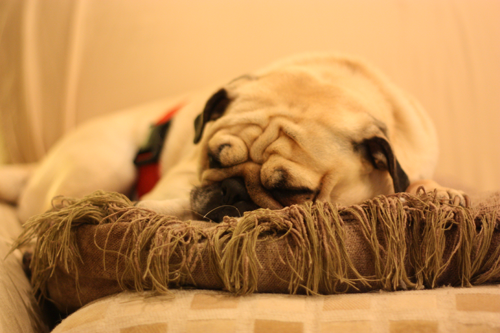 The little elves were tuckered out yesterday after a morning of fun at the dog park. They serenaded us with their snoring while we trimmed the tree yesterday evening. 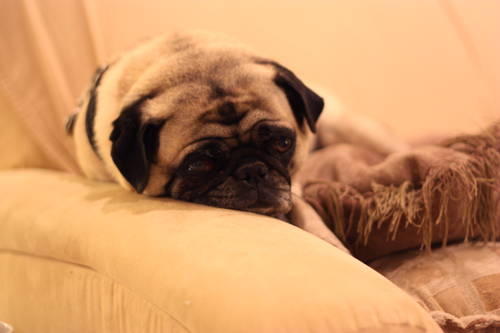 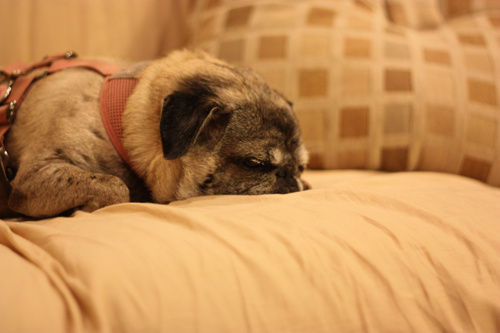 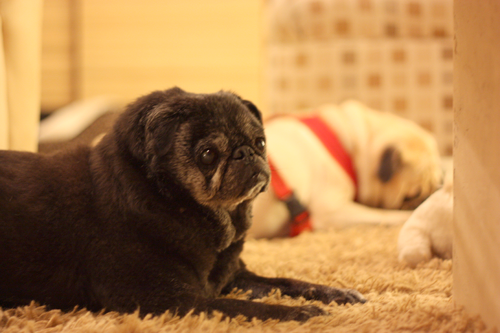 When the boys were about 6 months old we thought it would be a good idea to start taking them to the dog park to help socialize them.  The closest dog park to us at the time was very nice, but it did not have a separate area for small and large dogs.  This made me a tad nervous, but I thought it would be good for the boys to learn to play with big dogs as well.

After a couple trips at times which we thought would be off peak, we soon learned that the park was always fairly busy.  We soon settled into the routine of going in the evenings a couple times a week.  The boys quickly became known at the park and they did a great job playing with both big and small dogs.

We got to the park one evening as usual and the park was particularly crowded.  The boys went into the fenced area and immediately started playing.  The dogs were running and the boys were doing their best to keep up, when out of the blue, a greyhound sprints up to baby Benny and picks him up by the scruff of his neck and trots off of him.

I saw the whole thing and I frantically started to look for the greyhound’s owner.  Luckily, the owner was on top of things and was already on her way to tell her dog to put down baby Benny, which the greyhound begrudgingly did.  The owner pulled a muzzle out of her pocket and quickly put it on her dog.  At that point she proceeded to tell me that her dog most likely thought that Benny was a rabbit and she angrily stomped off because she didn’t want to have to muzzle her dog.

I was fine up until the point she got mad at us for her having to muzzle her dog.  It wasn’t like we were in the large dog section of the park, the park was for all dogs of all sizes.  And Benny never even went up to her dog, so it wasn’t like he was enticing the greyhound.  The greyhound sought him out.

I’m just so glad that the greyhound didn’t start to shake Benny when he picked him up.  Lucky for us, he just picked him up and started to walk away with him.

When this first happened, I was more than a little irked.  But, now when I look back on it I can’t stop laughing.  I can picture it plain as day, little baby Benny hanging by the scruff of his neck getting toted around by a greyhound.  That will teach him to be so cute!

The boys’ birthdays got us reminiscing about old times and thinking about all the crazy things that we have done with the pugs over the years.  The things that seemed to be the most memorable were the embarrassing moments or the times when our parenting just wasn’t up to par.  So, I thought I would share some of these stories over the next couple of weeks.  If I have any pics I will share them too, but I don’t think I have too many pictures of these events as I am glad that most of them went undocumented.

Adopting Luna was a very exciting time for us.  We were literally giddy with excitement and we couldn’t wait to welcome the little girl into the family.  Part of welcoming her into the family, for us, was to take her to do all the things that we enjoyed doing with the boys.  One of those things was going to the beach.

So, shortly after we adopted her, we made plans to go to the beach.  When we arrived at the beach, we went for a little walk along a boardwalk trail.  A walk that the boys had been on a countless number of times.  But, watching Luna learn her way around made the walk new again.  At the end of the boardwalk path is steps leading down to the beach.  The boys know this and this is usually when they get most excited because they can’t wait to get to the beach.  In all our excitement to get to the beach we all start to run.  The boys hit the stairs at a full sprint and Luna, feeding off the energy of her brothers, is not far behind.  We are almost to the bottom of the steps and I notice that the last step is going to be a big jump as the ocean has washed away much of the sand and now the steps don’t quite go all the way down to the sand anymore.  No problem.  It is certainly not a huge jump, it is just a bit longer so it breaks the momentum.  The boys see the difference and make the leap to the beach.  Luna doesn’t and she lands smack dab on her face.  We make the jump, pull her up out of the sand only to see that her face is covered in sand and so are her eyes.  The little girl never even blinked.

At this moment, we realize that the water we brought is in the truck.  So, one of us stays behind to try and wipe the worst of the sand off her face, while the other sprints to the truck to get the water so that we can flush her eyes.

We get the sand out of her eyes and Luna is really no worse for the wear.  She is ready to start running around on the beach.  But it is at this moment, that I start looking around because I am certain that someone is about to come take Luna from us.  She has been with us all of maybe three days and look how we are treating her.  Clearly we are not fit.

This was our wake up call to Luna’s vision issues.  We found out the hard way that the girl really can’t see all that well.  It was a process learning how Luna sees the world.  Over time we found out that Luna doesn’t really see that well looking down and that she can’t see much of anything at night.  After the face plant incident, we took things a lot slower with Luna as we had to figure out what she can and can’t see.

It was a wake up call for us and made us realize all of the things that we took for granted with the boys.

To this day, every time we go to the beach, I think about Luna sticking her head in the sand.  Lucky for us they let us keep her!