You are viewing entries tagged with the keyword Dog Park

One day last week we spiced things up a bit and instead of going for our normal walk after dinner we took a quick trip to the dog park. The moment we arrived at the dog park all of the other dogs left. Geez. I don't know if we should be offended or not.

So the pugs had the whole park to themselves. Henry amused himself for a moment by darting through the tunnel, but other than that the pugs spent the majority of their time sniffing around.

A few minutes before we were ready to leave, a small white dog arrived at the park. The dog was 11 years old and after the customary dog park greeting, the pugs and the white dog all went off smelling around in different directions. One 11 year old dog, two 9 year old pugs and a 7 year old pug don't make for the most active dog park crowd. The most active thing that night was the mosquitoes! 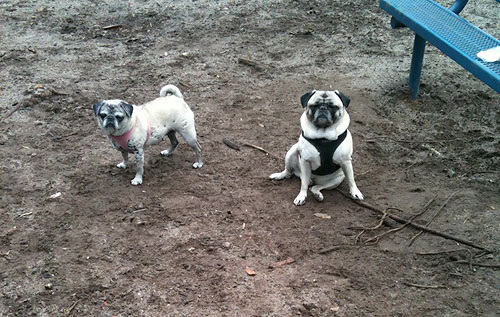 This is how you know it is time to leave the dog park. If we stay any longer Henry is going to lay down right there and go to sleep. And Luna, it is rare to ever find that little girl standing still at the dog park. And where is Benny you ask? I'm sure he is off peeing on one last thing before we head to the car to go home.

I hope everyone has a great weekend! 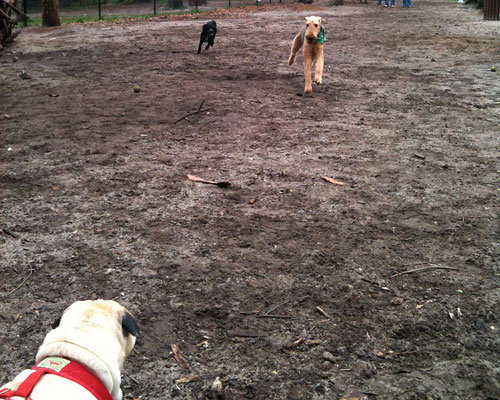 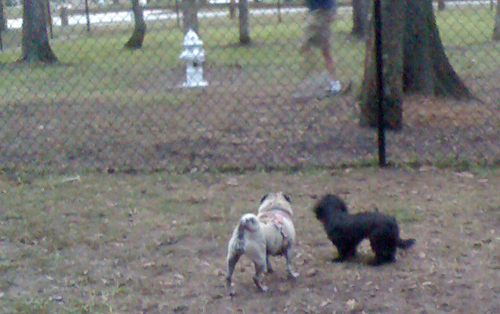 Luna making friends with another dog at the dog park. Looking forward to your captions in the comments. 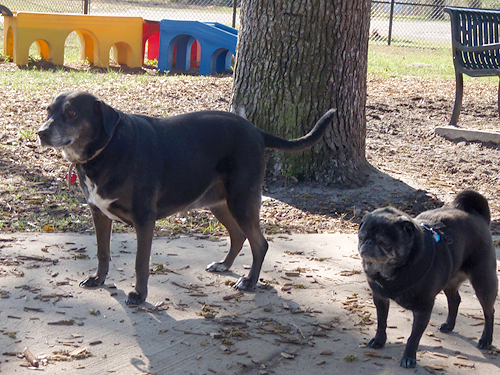 At our last visit to Paw Park, Sol made friends with another wise gal like herself.  Looking forward to your captions in the comments. 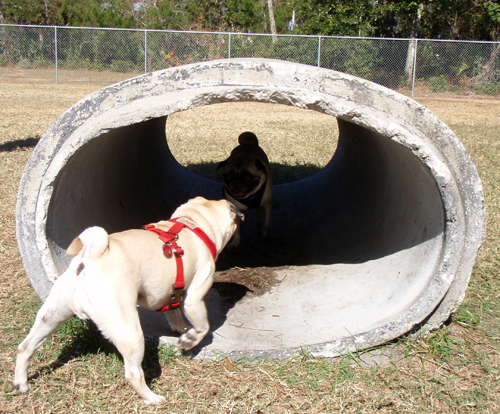 From our recent trip to the dog park, here is a shot of Benjamin peering into one of the tunnels.  Who is that shadowy figure lurking inside? 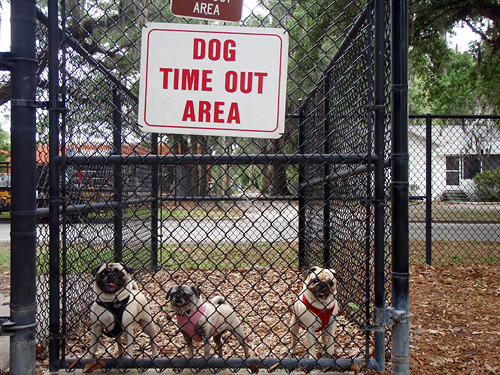 I know I already posted this shot, but I thought it would make a good Caption This photo.  Can’t wait to see what you come up with!

When the boys were about 6 months old we thought it would be a good idea to start taking them to the dog park to help socialize them.  The closest dog park to us at the time was very nice, but it did not have a separate area for small and large dogs.  This made me a tad nervous, but I thought it would be good for the boys to learn to play with big dogs as well.

After a couple trips at times which we thought would be off peak, we soon learned that the park was always fairly busy.  We soon settled into the routine of going in the evenings a couple times a week.  The boys quickly became known at the park and they did a great job playing with both big and small dogs.

We got to the park one evening as usual and the park was particularly crowded.  The boys went into the fenced area and immediately started playing.  The dogs were running and the boys were doing their best to keep up, when out of the blue, a greyhound sprints up to baby Benny and picks him up by the scruff of his neck and trots off of him.

I saw the whole thing and I frantically started to look for the greyhound’s owner.  Luckily, the owner was on top of things and was already on her way to tell her dog to put down baby Benny, which the greyhound begrudgingly did.  The owner pulled a muzzle out of her pocket and quickly put it on her dog.  At that point she proceeded to tell me that her dog most likely thought that Benny was a rabbit and she angrily stomped off because she didn’t want to have to muzzle her dog.

I was fine up until the point she got mad at us for her having to muzzle her dog.  It wasn’t like we were in the large dog section of the park, the park was for all dogs of all sizes.  And Benny never even went up to her dog, so it wasn’t like he was enticing the greyhound.  The greyhound sought him out.

I’m just so glad that the greyhound didn’t start to shake Benny when he picked him up.  Lucky for us, he just picked him up and started to walk away with him.

When this first happened, I was more than a little irked.  But, now when I look back on it I can’t stop laughing.  I can picture it plain as day, little baby Benny hanging by the scruff of his neck getting toted around by a greyhound.  That will teach him to be so cute!

A trip to the dog park 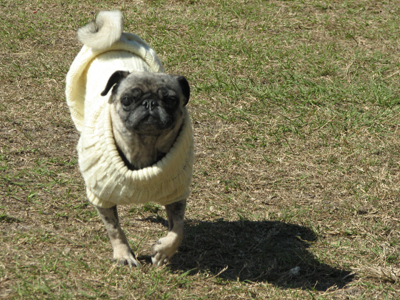 We didn’t have any big plans for Sunday so we thought it would be a good day to take a drive and go to the big dog park in Jacksonville and let the boys and little Luna run around.  This was Luna’s first trip to the park so we were curious to see how she would do in such a huge park with so many dogs.

Luna handled it like everything else that has been thrown her way the past two weeks since we have adopted her.  PERFECTLY!  She was the perfect little lady playing with many of the other pugs and small dogs in the park.  The only tip-off that this was her first visit to the park, was that she fell into the pond in the small dog section.

The small dog section of the park has a small pond at one end where dogs can cool off.  Luna thought of the pond more like a puddle and when she was chasing Benjamin & Henry around the pond she thought she would get a leg up by cutting through the middle of the “puddle”.  Well to her surprise the “puddle” was a little bit deeper than she thought.  All in all, she handled it well.  She quickly swam to the edge and shook herself off.  Surprisingly, she wasn’t phased by any of it.

We had towels in the car, so we got her dry and put one of Henry’s old sweaters on her to help keep her warm for the rest of the trip.

The boys were up to their usually antics.  Running around the sand pile, going through the tunnels and chasing other dogs at the park.  They did a good job looking after their little sister and making sure she didn’t stray too far from the pack. 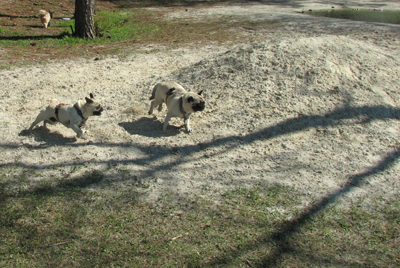 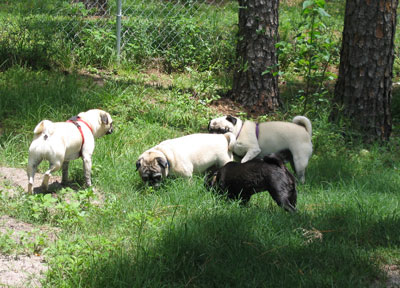 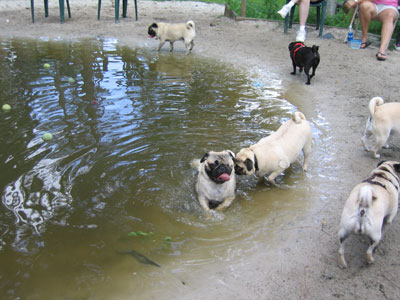 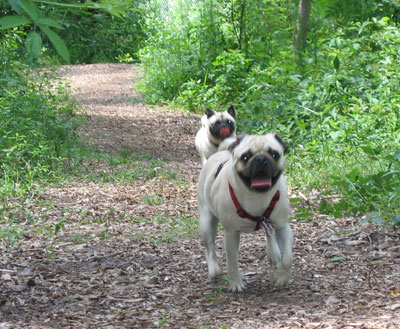