Puglet, from The Daily Puglet, wanted to show everyone just how easy it is to be Green. So for Earth Day he made an awesome video. More proof that we can learn a lot from our pugs.

While I am not a Pedigree buyer, I love their super slow-mo ad of dogs catching treats. Pure bliss. 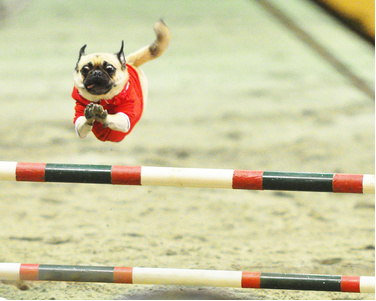 Look at Biff go! I just love the uncurled tail and little tongue peek he has going on.

I'm sure many of you have seen this by now, but I couldn't resist posting this adorable pug head tilt video. This is why having a conversation with a pug is so much fun.

It would appear that Seattlelites love pugs.  In fact, pugs are firmly seated at the middle of the top 10 dog breeds registered with the AKC in Seattle, WA.  However, one disinterested Seattle pug has caught my eye of late.  His name is Roscoe.  He is your typical pug with handsome good looks except that he and his owner have a knack for spotting strange objects while out and about.  Roscoe has a whole Flickr set called Disinterested Pug With Found Objects devoted to his findings.  I can easily spend hours looking at Roscoe posing with all the things that have crossed his path.

Check out the Disinterested Pug With Found Objects set on Flickr.

Well, pug lovers, you really have perfected your scrapbooking skills! The Milwaukee Pug Fest received 69 outstanding entries for its scrapbooking contest and announced the winners of the contest earlier this week. The winning entries are listed below, but be sure to take a look at all the entries.

In alphabetical order by artist

A special donation of $50 to be directed to Pug Rescue of San Diego in memory of Mr. Bones. Mr. Bones (Braveheart, Billy Bones) was featured on Barbara McNairâs scrapbook page. He crossed the Rainbow Bridge on Feb 2nd, 2009. He was starved and suffered abuse that resulted in brain damage. He will not be forgotten in Milwaukee, San Diego and hopefully all the hearts that forever love the senior pug. Go in Peace, little Man!

A $25 donation will go to the following rescues for participating:

Being a football fan, I always enjoy Super Bowl Sunday.  A few years back, I happened to stumble upon the Puppy Bowl on Animal Planet.  After watching a few minutes of the “game” I was hooked and I have made sure to record it every year since.

This year is Puppy Bowl V and it looks to be as exciting as ever.  Check out the Puppy Bowl V site to see this year’s starting lineup.  Kickoff time is set for February 1, 2009 at 3pm e/p on Animal Planet.