While Luna had fun mixing it up with all the dogs on the beach, the dog Luna wanted to play with the most was an adorable Dachshund named Oscar. Oscar, however, only had eyes for his tennis ball. But, that wasn't a problem for Luna. As he chased his ball all over the beach, Luna tagged right along with him. She followed him everywhere on the beach. I think that is the closest that Luna will ever come to playing a game of fetch!

There were lots of young pups at the beach last Saturday. The pugs made friends with 2 wiener dogs, a golden retriever, a husky and a black lab. The pugs were by far the oldest dogs on the beach. At almost 10 the boys were more than double the age of the oldest non pug on the beach. The husky was only 9 months old and after watching her run all over the beach I realize I have forgotten how much energy is crammed into a puppy body.

While the boys could not keep up with the husky or the golden, I was glad to see them get in the mix a few times. Henry used his smarts and pounced on the golden in one of their games of chase. After that victory, he was content to watch all the other dogs run around. I think he wanted to go out on top and just prove to himself that he still has it.

Which is better than what Benny did. After chasing the husky and golden to no avail, Benny just stopped and whined at them.

But, Luna, at almost 8 was in the mix of everything. And this picture pretty much sums up her feisty personality. She loves nothing more than to play with the little dogs, but she isn't afraid to mix it up with the big dogs. And the thing that surprises everyone is how fast Luna is. She can really pour it on when she wants to.

Saturday was a perfect pug weather day, so we decided to take the pugs to the beach. It has been a while since we have been to the beach, so as soon as we turned into the parking lot the pugs started barking their heads off in excitement. Needless to say, we were not sneaking up on anyone.

Since it was a beautiful day the beach was packed! Lots of dogs and lots of people. The pugs made some new friends and made sure to get a sandy mess. Which to me, just means they had a good time!

I will be sure to share some pictures of the friends the pugs made, but here are a few of Benjamin, Henry and Luna in action.

To say the pugs had sand from head to tail would be and understatement. As you can see, Henry is not shy about plopping his keester right in the sand. And what is a story about a pug trip to the beach that does not include a picture of Benny mid shake.

Luna surprised us all by actually getting her paws wet this trip. She was in and out of the water and up and down the beach. I think she had the best time of them all.

Since the pugs get a wet and sandy mess at the beach, they do a lot of shaking while they are running around playing. I caught of few shots of Benjamin shaking off some water and sand. I love to see how the wrinkles on the back of Benny's neck fly while he is shaking. He really gets into it. 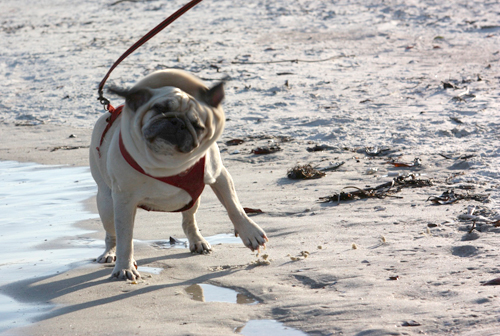 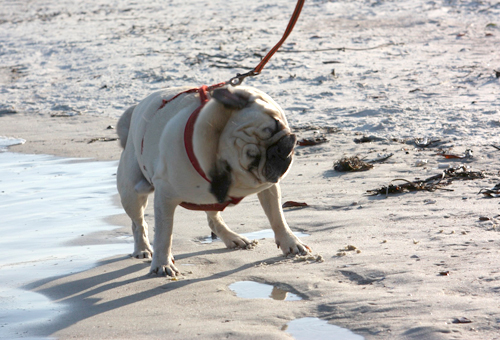 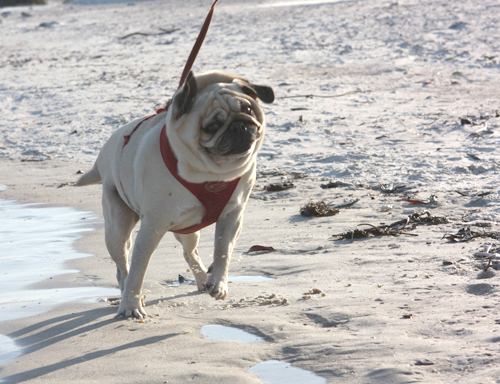 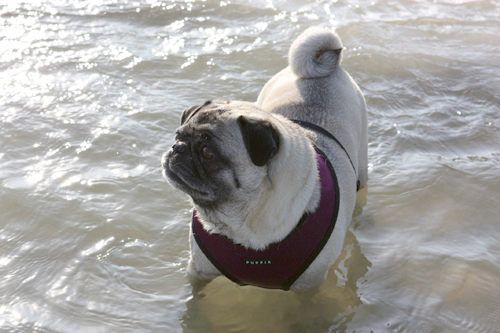 Since the water was warm, Henry was having fun running in and out of the ocean. He would run into the water about chest deep, splash around a bit and hop back to shore at full steam.

Since it was a nice day out there were lots of boats passing. Of course the boats left a wake. Henry being Henry plows right through the waves washing ashore. I was lucky enough to manage to get a picture of Henry jumping through one of the tiny waves. Tiny to us, but pretty big to a pug I would imagine. 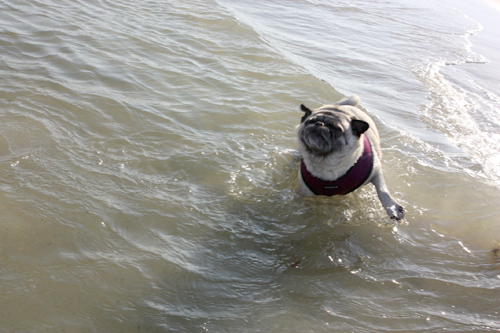 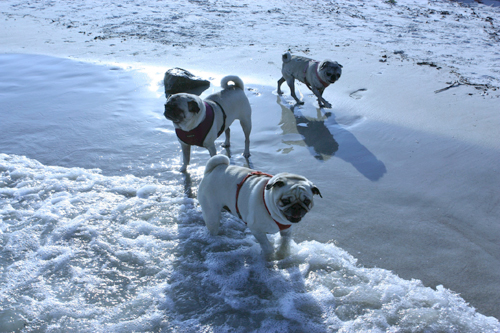 Good news! Our beach problem was solved! Despite, Saturday being a pretty hot day, things cooled off in the evening and we made a mad dash to the beach.

It was quite breezy out, but that only helped cool the pugs even more. Plus, the water temp must have been around 69° or 70° so the pugs had fun splashing around in the ocean. Heck, even I went in up to my knees.

I took a ton of pictures, so I think this week's theme is going to be scenes from the beach. For those still battling cold weather or heaven forbid snow, if you can't escape to a warm sandy destination we'll bring the warm weather and beach to you. 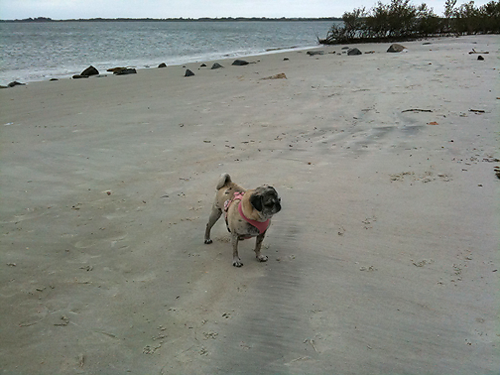 The pugs were all loaded up in the car and we were on our way to a park, when we decided to make an impromptu visit to the dog beach. The pugs hadn't been to the beach in months so we thought they would like it for a change. The only problem was that it wasn't an ideal beach day. It was cloudy, windy and cold. But we weren't going to let a little thing like the weather stop us. Plus, with the weather not being ideal we thought there was a good chance we would have the dog beach to ourselves and it turns out we were right.

Everyone had a good time except Sol was a bit disappointed. The lovely folks that she coaxed into giving her a hamburger the last time she was there were not at their pavilion. As soon as we passed the spot, she went to look for them. She smelled every inch of the picnic area, but alas they were not there. With no hamburgers, Sol didn't really see the fun of the beach.

Here is a little video of the pugs in action.

Pugs at the Beach from obp on Vimeo.