A boy and his Kong 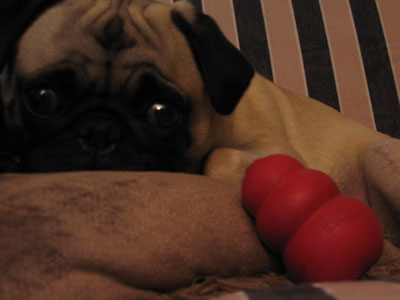 Both of the boys love peanut butter, so I occasionally give them a Kong with some peanut butter smeared inside. After I give them the Kong they will spend the next half hour licking it to get all of the peanut butter out. After the peanut butter has been cleaned from the inside, Benjamin has no interest in the Kong itself. Henry, on the other hand, loves to just chew on the rubber Kong. He will chew on it for hours after all the peanut butter has vanished. While he is chewing on the Kong, it makes this horrendous squeaking sound that goes through me like nails on a chalkboard. Since it is something that he really enjoys I try to tune out the sound as best I can and I let him chew it for as long as he wants. He works so hard chewing it that sometimes he chews himself to sleep.

One of my favorite pictures

I was organizing my digital photos in a new software program last night and I came across this photo. 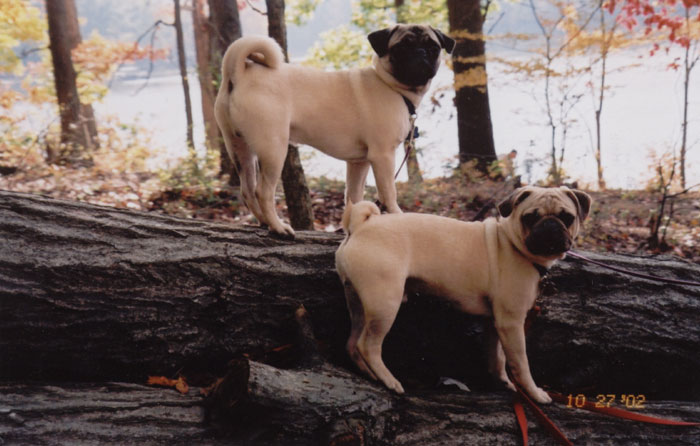 This is one my favorite photos of the boys.  It was taken at the lake when they were just 7 months old.

The year is quickly drawing to a close and it is time to start thinking about our 2005 New Year’s resolutions. Benjamin & Henry are already busy working on their lists. First up is Benjamin’s list:

It was a chilly 31 degrees when we headed out for our morning walk which meant it was time to break out the boys’ winter jackets. Ben’s favorite is his red hooded sweatshirt and Henry loves his leather jacket. 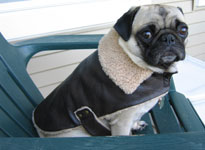 Ben has a really short and thin coat of fur so he gets cold really easily.  Henry, on the other hand,  has a very thick coat and he handles the cold much better.  But in the morning, it is hard to get Henry out from under the covers, so he likes to wear his jacket because there is nothing worse than getting out of a warm bed to go outside to brave the cold weather.  Trust me, I know!

I was just going through my pictures searching for some good shots to use for this year’s Christmas cards when I came across pictures of Benjamin & Henry in their Christmas costumes from last year.

Benjamin is Santa and Henry is the reindeer. The picture of Henry always makes me laugh because he looks a little bit like Kenny from South Park in that shot. 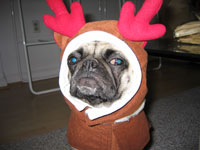 Whenever we go out, we are frequently asked if the boys are twins. I always respond, "No, they are not even from the same litter". To my surprise the other person will frequently ask, "So, how do you tell them apart?"

That question always makes me smile. The physical differences are pretty noticeable between Benjamin and Henry. Henry is about 5lbs heavier than Benjamin and is just a much bigger pug than Benny. Henry has a thick coat, a very dark mask and a dark stripe down his back. Benny's mask is on the lighter side and the stripe down his back is extremely light. Plus, and I wouldn't expect a stranger to notice this, but their tails curl in opposite directions

Besides their physical differences, their personalities are like night and day. Benjamin is very active, hyperactive may even be the proper term. He wakes up early in the morning and is ready to romp and stomp for the entire day.

Henry, on the other hand, is much more laid back. He would sleep all day if you let him. He can get very excited, but this is generally only for short periods of time. Then it is back to his naps.

Benjamin is outgoing, but he is pretty shy around strangers. Henry, however, will walk up to just about anyone. If they happen to pet him, he will park himself at their feet and will remain there long after they are finished petting him.

The cliche "opposites attract" must be true because these boys are inseparable. They are a week apart in age and have been "brothers" ever since Benjamin was 13 weeks and Henry was 12 weeks. While their personalities are extremely different they compliment each other perfectly. Benjamin encourages Henry to be a little more active and Henry has shown Ben that sometimes it is fun to relax and lounge around the house.

Why must you eat everything?

I don’t know about you, but my boys used to pick up everything they came across when they were puppies. They are much better now (or should I say much more selective now) that they are almost 3 years old and have learned the “drop it” command.

Benjamin has come a long way since he was a pup and knows that he isn’t supposed to eat everything that he finds on his walk. He does well resisting most things, but he just can seem to resist picking up mulch.

Henry, on the other hand, may pick up a piece of mulch occasionally, but he generally finds much more interesting items. Here are just some of the things I have had the privilege to pull out of his mouth on our walks over the years:

Now you may be thinking to yourself where do these people live, but I assure you we live in a very nice, and fairly clean neighborhood. Henry just has a knack for finding unusual items.

Since the boys have improved so much it is a laughing matter now, but when they were puppies it was a very frustrating behavior. So if you are thinking that you should have named your puggie “hoover”, have patience. They do seem to get a bit better with age.

A Day at the Lake

There was finally a break in the clouds last Sunday, so we decided to go to the Lake to enjoy the good weather.  The boys had a great time chasing each other and running in piles of leaves.  They met some other pups that were out on the trails as well and while the water at the lake was quite chilly they managed to get their paws wet while climbing on some of the rocks at the lake’s edge.

Here are some pics of the boys in the action: 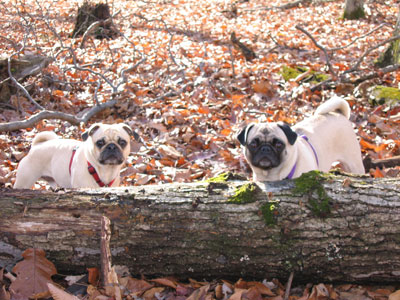 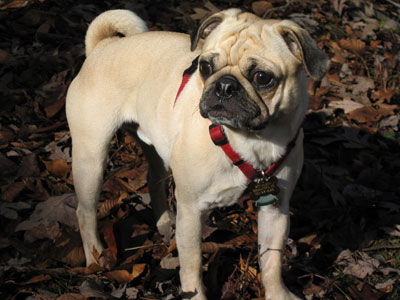 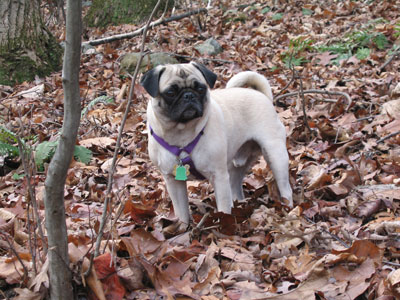 A great time was had by all!