You are viewing entries tagged with the keyword Weather

Lucky for us Irene stayed off the coast and her effects on our weather were pretty minimal. Unfortunately, Irene travelled right up the east coast. We kept a close watch on the storm this weekend to see how Irene would effect G-Ma and G-Pa in Maryland. G-Ma & G-Pa have had quite a week. They had an earthquake and a hurricane! Geez!

I hope everyone in the path of Irene is doing OK. Our thoughts are with you all.

The Boys of Summer

The boys of summer like to hang out in the shade! It has even been too hot for Henry and Henry absolutely loves the sun.

I feel bad for the pugs because our walks have been so short. One quick jaunt early in the morning and then one short walk in the evening. And sometimes our evening walks get rained out. But, I don't think the pugs mind too much because as soon as they step paw outside the door their urge to walk quickly fades. 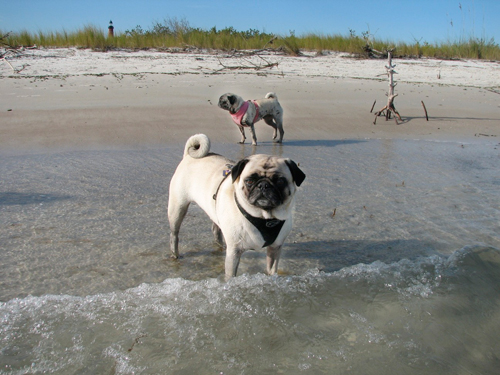 I think it is safe to say that the peak pug weather season is upon us in Florida. The skies have been blue and the temperature is perfect for the pugs. They can go on long walks without getting too hot, bask in the sun for hours and lounge around in the backyard. Trips to the beach are also possible in this weather. By the time summer rolls around, it is too hot for the pugs at the beach.

The picture above was taken during pug weather season in 2006. Like previous years, we will be doing as many outdoor activities as possible during this short window of perfect pug weather. Because, just around the corner is summer. And Florida summers and pugs just don't mix well. 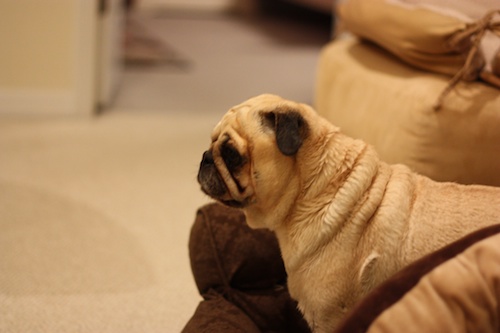 Yesterday morning, when I got up to feed the dogs, I could hear the rain beating down on the roof. I knew in about 5 minutes, after the pugs finished scarfing down their breakfast, they weren't going to be happy campers.

The morning routine is that after they finish eating, the pugs let themselves out through the doggie door and go potty in the yard. They promptly return to bed after that.

As I stumbled around still bleary eyed, I heard Benjamin go out through the doggie door. Less than one second later, he came right back in. He stood there looking around, weighing his options. Could he hold it and go right back to bed? Probably not, because just knowing that it is raining outside makes Benny have to go potty. Would I allow him to pee through the screen from the cover of the lanai? That was a risky move because he knows how I feel about the boys peeing on the screens.

So, I told him we would do our summer thunderstorm potty trick. I would take him out front and he could go potty on some flowers by the front door while remaining under cover. Except that it is not summer and the flowers that the pugs normally potty on have all but shriveled up and died because of the cold winter weather.

Knowing what he is supposed to do, but not having the flowers he likes to pee on, Benjamin is pacing. Finally he gets up the courage to sprint out to one of the flowers, go potty real quick and sprint back. I open the door and he runs as fast as he can back to bed.

Seeing the ordeal that Benjamin just had, Luna decides that she can hold it and promptly goes back to bed. I know she can, so I let her go back to bed without going potty.

Henry, on the other hand, proceeds out the doggie door, business as usual. He may or may not even notice that it is raining. Either way, it doesn't matter, because he doesn't care. He is his usual dawdling self. He eventually, comes back in, very wet from his time in the yard and hops back into bed. I encourage him to lay next to Ben. 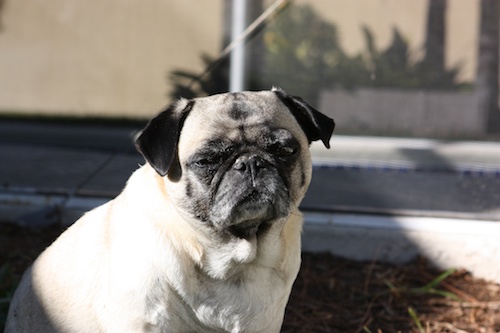 Another cold front has moved through and we are back to pretty chilly mornings and nights. But, I guess, when you are the only state with no snow on the ground you can't really complain.

Henry, the sun lover, does not let a little cold weather keep him from soaking up the sun's rays. At lunch each day, he finds the sunniest spot he can, and then sprawls out. The rays aren't as warm as they are during summer, but there isn't a bunch of white stuff covering the grass so he will take it!

Have a good weekend everyone! 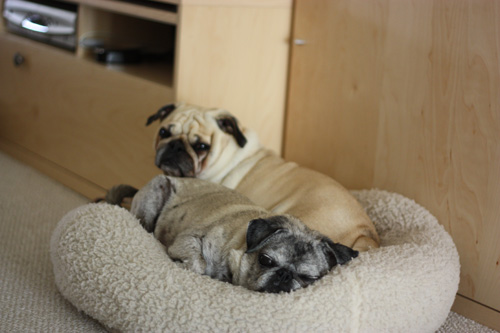 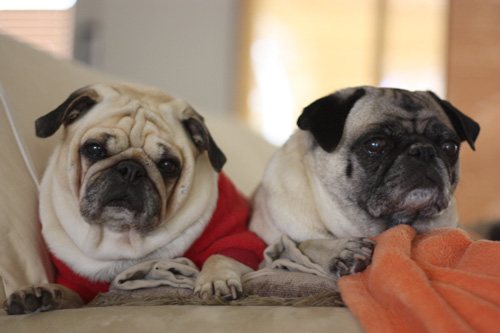 Last weekend, we dug the electric blanket out of the closet and put it on the bed. I know, I know. We live in Florida. What on Earth would we need an electric blanket for? Before, I lived here, I used to feel the same way. I laughed at the Floridians with their fireplaces and boots and gloves and thought they were all crazy. Then I lived here for a few years, and now I really regret not getting a fireplace in the house.

I have learned that cold is relative. Plus, I was talking to a neighbor who spends a lot of time in Colorado and she said that 30° in Florida feels colder than 30° in Colorado. It has something about the amount of moisture in the air. I'm not exactly sure on all the details. What I took away from the conversation was that I was totally justified in buying the electric blanket.

In any case, we put the electric blanket on the bed last weekend and the pugs love it. They are in toasty, pug heaven.

However, the recent cold snap does have me very concerned about Benny. He has been very stiff and slow going the last few days. Right now, I am chalking it up to the cold weather taking its toll on Benny's aging bones and joints, but nonetheless it has me very concerned.

While I am working, I have been keeping him in a sweater to help him stay warm. He seems warmer, but it doesn't seem to be helping his stiffness.

Yesterday, I had an idea and I thought I would create a mini electric blank for the pugs to use during the day while they are on the couch. So, I dug out the heating pad, put it on low, stuck it under a double folded blanket and within seconds there was a pile of pugs on the heating pad. The heating pad isn't meant to stay on all day, so I have been turning it off and on throughout the day hoping to keep the pugs feeling good.

Hopefully, the cold will pass and Benny will get back to his usual spry self. 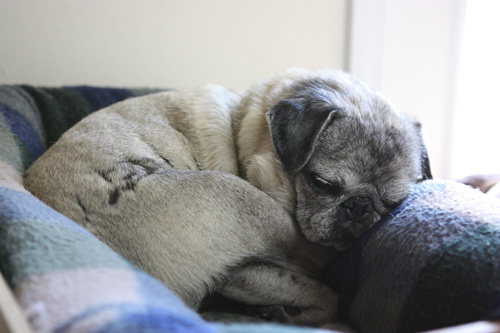 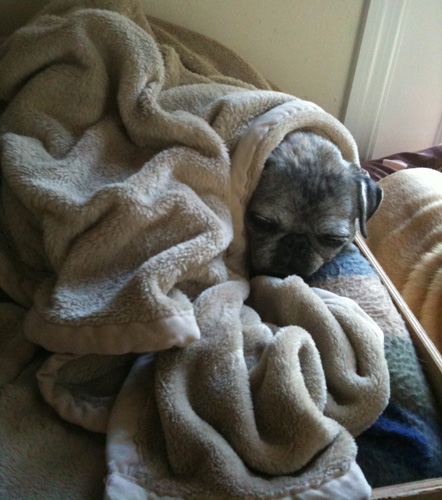 Which means blankets for human use are pretty hard to come by around here. 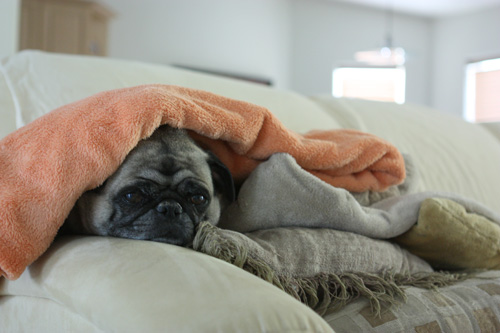 A cold front moved through the other day, so we are having what most people would consider fantastic winter weather. To Floridians, though, it is chilly.

Henry was on the couch minding his business, but I thought I would have a little fun with him and bundle him up in the blanket. He didn't care that I was covering him up. Henry is very good that way. He will let you pose or pretty much do anything you want to him. Anything, except cutting his toenails. That is where he draws the line 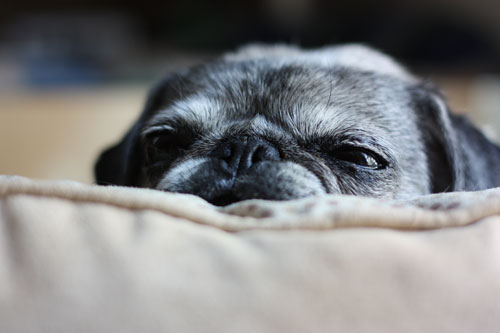 Since the weather has been very pug friendly the last week or so, the pugs have been way more active as of late. They are in the yard more soaking up the sun, we are back to going on quick walks at lunch and long walks in the evenings. During the summer the pugs don't dare attempt to walk during midday hours. Plus, the pugs can venture out with us in the car when we run some errands without getting overheated.

I know winter is settling in in many places and that means lots of cold weather and limited walks and pug activities. But in FL, winter is season that best agrees with pugs.